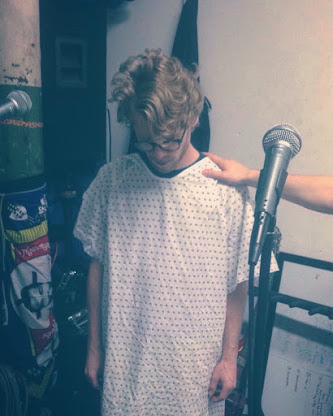 The ‘Great Highway Theft’, as it came to be known, shook up a storm of something fierce in the time of Bobby Goldberg. When consorting with Athena, Bobby could not but feel a great indignity cast over him as the goddess raged. Being unable to intervene by divine law, Athena charged Tony Goldberg, Bobby’s brother, with the task most high of recouping the stolen manuscripts. You see in that time, more than just aesthetics were at stake; for in the wake of the Apollonian and Dionysian dialectic a dark force had reawakened, unbeknownst to even the gods. Cronus, the great Titan, who had once consumed his own children, but had been slain for his throne by his only spared son, the mighty Zeus, had returned undercover. In the shadows he was called the ‘Coroner’, for he was the father of time, reaper of all humankind. Once before, Tony and Bobby working together on early manuscript conjurings had fended off the undercover Coroner without realizing his titanic nature, but now with the manuscripts gone and the fissures of duality growing ever deeper, the Coroner again amassed his form. Thus, Tony was sent back to scour through time for the stolen manuscripts. In the era before the Great Phoenix, ca. 2017, he encountered the master soundscapist Davis Connors. Having suspected an acquaintance of Davis, named Sean, to be in power of some mighty aesthetic force outside of time, Tony implicated himself as a mentor/daimon to Davis so as to catch a glimpse of the wild horses that so seemed to steer the chariot of rgms. Tony bequeathed to Davis the sacred rhythms on taut animal hides and the technomancy of aural replication, all of which Sean recognized as necessary elements for the kairosis of the manuscripts lifted from Bobby and forged a partnership with Davis. Patiently, Tony observes as the rgms unfolds and the coroner gathers his army.

Associated Acts/Works outside of RGMS