Towards More Objective Translations for a Non-Synesthesiac: Light to sound 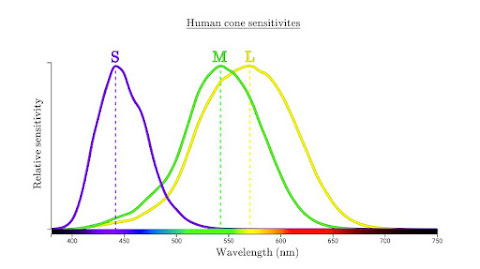 “Receptor curves have overlap in their spectral sensitivity” and “critical information is not extent to which receptors are activated, but the relative activation of the two receptor types.” (Carterette, Friedman). Due to this phenomenon, it is the total excited area underneath a cone in the graph above that determines the intensity of stimulation for a cone. So, while the measurement of wavelength intensity for an LCD represented image may differ from one of the physical object, as long as the excited area within a cone’s sensitivity is equivalent, the images are perceived as the same. In order to create a more accurate translation it will be crucial to develop a transform based on the sensitivity of these cones, as well as a sufficient graph for the JND’s of light and to be able determine the data in terms of wavelength, which needs to be measured. Additionally, just as ‘Equal-Loudness Curves’ are present in the perception of sound, it will be important to determine an accurate representation of this phenomenon optically (wave amplitude) and apply the necessary transformation in translation by taking into account the inevitable graph differences. The luminosity function (pictured below) shows human’s relative brightness sensitivity as a function of wavelength; while this graph lacks an exactness, a transformation is currently being worked on to reconcile the ‘Fletcher-Munson Curves’ and this photopic relative brightness. 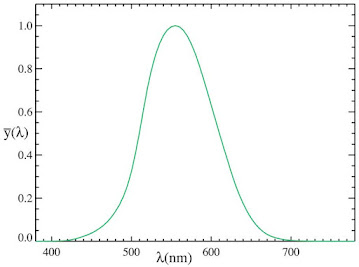 In representing the translated frequencies using additive synthesis most closely mirrors how our eyes perceive light. White light is all wavelengths of the visible spectrum at equal intensity, color then, depends on the varying intensities of amplitude in reflected light. Therefore, the optical information our eyes perceive contains some degree of amplitude at all wavelengths (unless the light is monochromatic e.g. a laser); the activation of the cones in our eyes is a result of the additive synthesis of all frequencies in light. When the translated frequencies are presented additively in the audible spectrum, however, musical beats are always present. All wavelengths create beats when interacting with one another, the reason these beats are not perceivable optically is that most visible waves are incoherent, and the non-linear processes cause the beat to become a component of the signal. Additionally, due to the rapid oscillation of light waves, sources with a small enough relative frequency difference to be observed by the eye are near impossible. This intrinsic fault of translation seems to be only quality, which lacks a potential solution at this stage. However, to re-iterate no translations, even those between languages, are truly able to preserve and portray the exactness of the initial message or data.
Human perception inherently disregards a vast quantity of physically objective stimuli. The information, which our minds process as sight is transmitted via narrow windows within the electromagnetic spectrum our eyes have become sensitive to. Sound only becomes audible once our basilar membranes can wrangle the size of a wave, but then audibility disappears if the wave becomes too short. These waveforms within the gaps on opposite ends of perception’s spectrums interact with our bodies, and more often then not we are unaware of their presence. We’ve seen how dangerous ultra-violet radiation can be our bodies, but we still do not grasp the full effect omnipresent radio waves, for instance, may have on us. Perhaps, the sensory bombardment of un-perceivable waveforms unknowingly disrupts our brain’s full potential. At the turn of the 19th century artists at the forefront of modernism attempted to ‘re-induce’ an ancient harmony of mind to nature they felt had been lost in the evolution of consciousness. It could be inferred their efforts predicated the 20th century technological explosion, which introduced an unquantifiable amount of non-perceptual information into our surroundings. Spiritual seekers have always retreated from society into the ‘silence’ of nature to awaken their spiritual bodies and explore the psychological depths of the mind, like the psychonauts of Tibet. Does this omnipresent non-perceptual information then stunt our abilities to evolve the capacities of our consciousness? And if we develop methods of translation between the non-perceptual and perceptual, is it possible to infer the effect the former may have on us?
This piece compiled in MAX/MSP includes the discrete frequencies and amplitudes for wavelengths 380nm – 720nm resulting in 420 additively synthesized sine waves.
The amplitudes are derived from the Theremino graph of the incandescent bulb detailed above.
The image below is a glimpse of the patch’s framework. All 420 sines are initiated simultaneously.
Each discrete wavelength includes a subpatch, also shown below.
Herein, the amplitude of the given wavelength is set.
The patch also allows for amplitude change over time, and includes a variable time domain.
This design is for future projects, which strive to translate video to sound in real time.
The exported .wav file from the additive patch is then re-processed via sampling, EQ automation, harmonic distortion, and reverb for the composition. 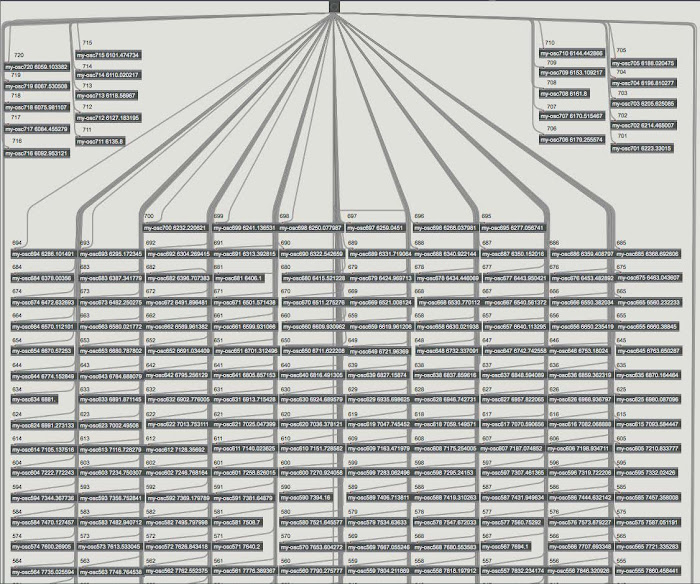 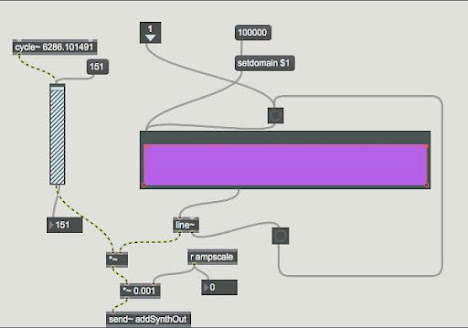