The Meaning Behind rgms

rgms, or the Rube Goldberg Machine of Semiotics and Symbols

Who is Rube Goldberg?

A wise, some say ancient, engineer (some say reincarnation of the Egyptian God Thoth) - the Rube Goldberg we are familiar with was an American cartoonist in the 20th century. The blueprints for the machines he engineered exist today only in the form of newspaper cartoons. Much like the inventions of Leonardo Da Vinci, these machines exist seemingly outside of time, and it is yet to be seen whether or not they will all be realized.

What were his machines?

The essential nature of these machines is that they would all perform a rather simple task, but in an indirect and overly complicated manner. For instance:

This methodological approach may be considered an inversion of sorts of the philosophical method insofar as in philosophy we pose rather suspiciously simple questions (unknowns) such as ‘Where do we come from?' or 'Where are we going?’ and end up doing 2,644 years of semantic acrobats to find the answer to that simple question, which ultimately still evades us today. Whereas Rube, on the other hand, begins with a simple action (known), and theorizes the infinite pathways and causations, which may (or may not) result in accomplishing the a posteriori action. Fundamentally, the difference is a matter of destinations, known versus unknown. Both methods involve crafting rather complex logical constructs and arguments, but the former sets sail with no reference for where it may arrive, while the latter is in possession of a map, for it has been there before.

This might lead one to the question: Are we perhaps going about this wrong?

This is yet to be seen philosophically, but a similar question may then be applied to Rube’s machines. Are we misinterpreting these blueprints by trying to construct their material manifestations on the physical plane? By seemingly never attempting to build any of these machines himself, and ironically crafting the most elaborate schema to accomplish rather banal tasks with one of the most simple technological innovations of modernity, the pen, is Rube not then perhaps deconstructing our epistemological understanding of the blueprints and engineering’s all too materialistic empirical bias, much like the postmodernists would do some 20 to 30 years after Professor Butts and the Self-Operating Napkin was published?

Semiotics is the study of signs. A sign is anything that communicates a meaning that is not the sign itself. 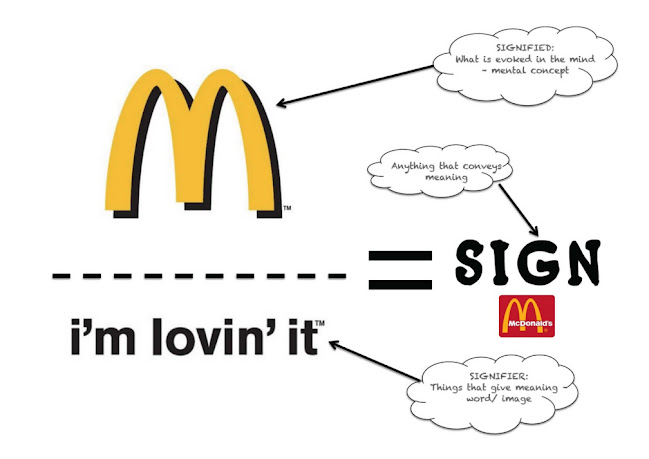 Thus, it is a relationship of signifiers and what is signified.

Language itself is comprised of signs and classified as semiotics in the Saussurean tradition. 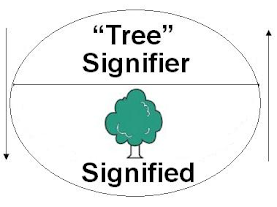 The nature of language is similarly engulfed by the catchall philosophical question ‘Where did it come from?’ Did words become signifiers from a mimetic tradition (i.e. imitation of nature)? Or were they imparted to us by some divine beings? Or perhaps it’s all just a matter of convention. While we may not be able to answer this straightforwardly or at all, we can perhaps, however, give a more singular answer to the question ‘What is it for?’ Simply put, language functions for the purposes of communication (poetry aside). This is unlike the study of philosophy, which still cannot provide a direct answer for the question 'What is it (life) for?', with the question of 'where it came from/where it’s going'  aside.

Symbols, on the other hand, may be considered the deeper metaphysical layer of semiotics. The meaning of symbols evokes not only a singular signified thing, but a panoply of abstractions associated with the signifier. They therefore may be thought of as a series of intricately woven signs.

Music may well be said to be made up of both semiotics and symbols. The notes (frequencies) are semiotic. Notation is a semiotic set or system of signs to convey meaning to a performer, as in "You there clarinetist, play me an A4". However, when the notes come together, they no longer necessarily signify what the notation did. For instance, when you hear Beethoven’s 5th Symphony, the point is not to think ‘G G G Eb… F F F D…’, but rather something more abstract, elusive, ephemeral, and perhaps dream-like. Is this the knocking on the door by fate? Or something which we cannot even begin to put into words, never mind imagery? Thus, the symbolic nature of music arises out of its semiotic development. This signifier – signified relationship also transcends conventional notation, for with the dawn of electronic instruments and computer interfaces, we have knobs, keys, faders, and lines of code, which indicate particular sonic outcomes. The amalgamated clicks, twists, turns, depresses, etc. throughout the course of our interaction with these physically manifested signs results in a music, which for whatever reason compels us, and becomes a symbol of meaning for our lives.

Similar to language, while we may not be able to answer the question of 'Where does music come from?', we may however have an easier time answering the question ‘What is it (music) for?’ Simply put, to instill meaning - even when music is thought to be used therapeutically or for pure entertainment, there is still an undercurrent wherein meaning is extracted unconsciously regardless of the unwitting listener. However, the essence of this ‘meaning’ is beyond words, since it is more akin to a bolt of understanding, never to be fully realized consciously or articulated. This may be the reason philosophy is unable to answer such a question, since philosophy deals largely with our conscious understanding of phenomenon. Nevertheless, this question itself is never really asked by the music, but rather by philosophy, since questions are only function of language. However, despite being asked by philosophy, it can ultimately only be answered by the engagement with the thing that instills meaning, i.e. the music. Even so, whether or not philosophy asks this question, we may well find ourselves struck with an unutterable and transcendent realization of purpose and meaning when colliding with music.

Now, if we begin to unravel just what Rube Goldberg may be abstractly inferring with his epistemological deconstructions, we may suppose that he is making analogy to the arts' ability to answer the question of purpose, this question of 'What is it (music/life) for?', which philosophy cannot. Not only that, but he has also provided us with a formula of how to reconcile the quandaries of philosophy through the triumphs of art. Philosophy is notorious for its indirect and overly complicated manner of trying to answer rather (seemingly) simple questions. Music (or art in general), on the other hand, may give us an answer to a question never directly asked by the medium itself. Instead, within music this question of meaning is perhaps phrased in the form of complex and indirect sets of semiotics, delicately interwoven into symbols, which all of a sudden inspires some pure and simple understanding within us. In the Rube Goldberg machine, we have already found this meaning, the wiping of the chin with a napkin, as we have experienced it before, just as we have experienced meaning through music before. Now, it is only a question how else we can arrive at meaning as such, and in what manner might we go about it so as to make the experience all the more profound. That motif from Beethoven's 5th is our known destination, yet the meaning those 4 or so notes themselves inspire in us pales in comparison to the context in which it is placed. The motif is the proverbial wiping of the chin with the napkin, while the symphony is the machine, which takes us there - the destination is nothing without the journey.

Therefore, as musicians and composers, if we keep in mind the pure, simple, and transcendent ‘answer’ of music, i.e. the desired experience in which one finds oneself filled with an ineffable understanding, but begin to complexify the procedural tactics (or methodology) through which this ‘question’ is beckoned, we may then stumble upon an all the more profound manner of engaging with the meaning, and better integrate it into our conscious understanding. Rather than directly answering the question of meaning, we create a way of participating in it. As we further realize and better articulate meaning in this way, we shall thence strive to pass the torch of wisdom unto those whose ears remain open and lips stay sealed until all that is to be imparted is through.

From the name springs everything. It has been said that at the moment of birth, the spirit of the child will often whisper it’s own name into the mother’s ear, and the dynamic symbolic meaning of that name will unfold throughout it’s life. From here, at the inception of the name the Rube Goldberg Machine of Semiotics and Symbols, the collective moves towards its fate. Not so much in the sense of predetermined manifestation, but rather the archetypal guiding principles under the influence of which we shall develop and issue forth. The meaning of the RGMS shall thence be to cultivate meaning, taking our experience in this material realm to new heights and dynamic forms; opening the pathways towards the participatory experience through which meaning envelops the totality of our sense of being.