In order to develop a deeper, more symbolic relationship with music we also need develop more complex tools or heuristics that initiate us into dialoguing with the music and symbols beyond time and space.

We may think of the Release Code Chart as the exoteric side to the more esoteric Archetypes of Music Chart presented here: 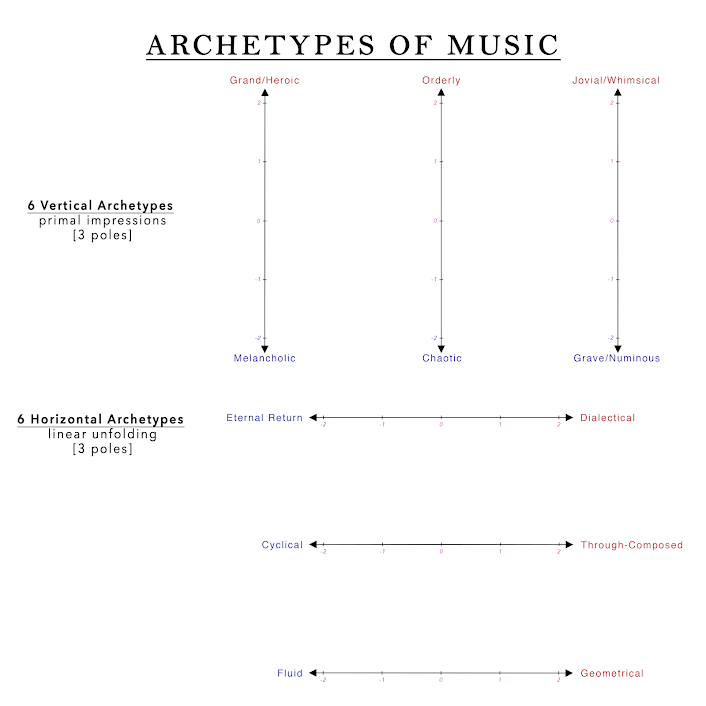 While the Release Code Chart deals with a more historical and cultural situating of  music, Archetypes of Music seeks to unearth the more transcendent characteristics of the music i.e. those which are not contingent upon culture or history. Archetypes themselves are our closest representations to the ineffable transcendent principles. They are the prime form given to these transcendent energies, which play out in the immanent. The more archetypal the phenomenon, the more collective it is, hence beyond culture and history or beyond time and space. Although we can never truly get beyond time and space, Archetypes provide the most fruitful path to dialoguing with the transcendent in a more symbolic manner.

Just as the energy of the transcendent bifurcates into two opposing poles in the immanent i.e. the dualism of Conscious and Unconscious energy (the most Archetypal understandings of the transcendent), so too do we have such polarity apparent in the Archetypes of Music. As such we have 6 total polarities, which comprise the second most Archetypal energies of music (we shall return to the most Archetypal later on). These 6 polarities yield 12 Archetypes total, a number not all too uncommon in things metaphysical. The first 6 of these Archetypes, or 3 poles, deal solely with one's ‘Primal Impressions’ of the music, or that which can be deciphered within the timeframe of one’s perception of the present. Although there is much to say on the nature of the present for practical purposes we shall suppose this to last no more than 12 seconds in time. These Vertical Archetypes are of the Spirit energy, as they are immediate and most palpable. These Archetypes themselves do not encompass the whole of the emotional spectrum, but are rather the most base forms of the panoply of emotions and impressions experienced on Earth. For instance, within the Archetype of Grand/Heroic we may find music which can be characterically described as joyful, uplifting, ecstatic, thrilling, etc. Therefore, the Archetype of Grand/Heroic is no static entity, but rather a tool for classing a common thread, which may be found within these ‘seemingly’ widely varying states of mind. As such, we will find no music, which is classifiable as the Archetype of Grand/Heroic and no other. Characterizing it Archetypally helps us not only to distill the essence of the music, which makes it more approachable symbolically, but also creates a more direct dialogue or relationship between the piece of music at hand and all other musics. The sliding scale provided between each of the Archetypal poles allows us to provide space for the more nebulous emotions and impressions, which may seem to inhabit two Archetypes simultaneously. Of course all music embodies every Archetype simultaneously, the question is a matter of to what degree so. Still though, those emotions/impressions such as ecstasy, may seemingly be able to embody a strong degree of Grand/Heroism, but also Grave/Numinosity, and it may achieve that superposed state via a seemingly more Chaotic energy. So then we may assign it to the highest degree of Grand/Heroic, but also perhaps to the second degree of the Grave/Numinous and Chaotic Archetypes.

On the other hand, we have the 6 Horizontal Archetypes which concern the ‘Linear Unfolding’ or temporal experience of the music and structure of the piece. This is the more Soul oriented dimension of music, that which demands prolonged engagement in order to experience it. While it would be of use to explain each of these Horizontal Archetypes in detail, it might rather be more apropos to suggest a listener meditate on the Archetypes within the context of music. The word chosen has in it, all that is needed to understand, some more poetically, some more directly than others. For the sake of continuity, however, we shall take up an example of one Archetype: Eternal Return. In its most Archetypal form, a music classifiable as the Archetype of the Eternal Return, would be a simple loop, repeating ad nauseam, but may also include the Classical Ritornello form, as well as any song, which contains an explicit Chorus. These Archetypes may again operate within a degree of simultaneity as we may have a song with a Chorus, which changes from verse to chorus rather abruptly making it appear more Geometrical than Fluid. Furthermore, if the song follows a structure, which returns from where it started then it may be apt to class it as closer associated with the Cyclical Archetype than that of the Eternal Return. Conceptually, the idea to classify the music based on the Archetype, which is most apparent to the ear and the mind. Thus, while a song with a Chorus may be said to be of the Archetype the Eternal Return, the longer the space between the Choruses the more it may seem to be of a Cyclical nature, Cyclical implying a departure from something followed by an eventual return, perhaps recognizable as the same, but contextually different. On the other end of the spectrum of the Eternal Return Archetype, we have the Dialectical. For this, I will merely say - think Sonata Form.

Therefore, we may then have a music, which contains an Archetypally Grand/Heroic Harmony/Melody, but a rather Chaotic Dynamic scheme, or perhaps a very Orderly Complexity, but Melancholic Timbre, etc. Of course, these elements may also be evident in the Horizontal Archetypes, when perhaps a piece changes Tempo rather abruptly or Geometrically, or the level of Saturation/Density gradually increases, making it appear Through-Composed.

Ultimately, there are two further most Archetypal energies at play in music we can identify and analyze within music. That is, the polarity of Tension and Release. We might say that what gives rise to each of the Vertical and Horizontal Archetypes delineated above is the ratio to which the music deals with Tension versus Release. For instance, a Tension filled music, which contains many unresolved Harmonies may appear far more Archetypally Grave/Numinous than Jovial/Whimsical, or on the other hand, a music of Release, which employs short, single chord, continuous loops may be associated with the Archetype of the Eternal Return, since no tension is every allowed to accumulate. Furthermore, it ought to be noted that each pole of every Vertical and Horizontal archetype itself is a derivative of the greater Archetypal pole of Unconscious and Conscious energy, wherein the Blue colored poles are representative of the Unconscious energy and the Red of the Conscious. However, while Tension and Release comprise a dual Archetypal understanding of music, these polar aspects of music do not fit neatly into the general Archetypal binary of Unconscious and Conscious. Instead, they may be considered a nested subset wherein a discrete balance of Unconscious and Conscious may be found within either Tension or Release depending on the content and context in which it is placed.

With the most prime Archetypes of Tension and Release on one hand and those more specified Archetypes concerning the Elements of Music on the other, we can see how the Vertical and Horizontal Archetypes outlined in the diagram are situated in between these two extremes of Archetypal understanding. As such these Archetypes of Music will be our most apropos heuristic within the RGMS. While we will not discourage the use of the Tension and Release or Elements of Music Archetypes in analysis, it is these more mediated Archetypes presented in the diagram above, which will provide us with the most apt avenue into unearthing the symbolic meaning of music.